We don't book chicken buses — shuttles, taxis and private vans, but not chicken buses. While I highly recommend a short trip on one, you're on your own. They don't take reservations and you couldn't rely on them if they did.

That said, no trip to Guatemala is complete without experiencing at least a short trip in a chicken bus. Step on one and enter the real Guatemala. The noise, the smell and the overwhelming mass of color ...the wild craziness is Guatemala at its best. Give it a whirl! What have you got to loose? 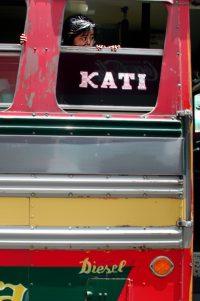 Picture yourself crammed in a old school bus packed with Mayans — brakes smoking as you careen headlong down narrow mountain roads. It's an exhilarating cultural experience — one you won't soon forget.

Guatemala is nothing if not colorful! Here, the ever so mundane American school bus comes dressed like a Las Vegas show girl. The bizarre blend of American functionality and Guatemalan pizzazz is wonderful to behold. Picture a mechanical pig decked out for Carnival. They are simply fantastic ...as long as you don't care where you are going or when you get there.

One might think an old bus unsafe. Nay! Nay! This is a vehicle built to transport the youth of America. At some point in the middle of the last century there was a meeting of Blue Bird Bus Company engineers — a room full of short haircuts, polyester suits and master degrees from Cal Tech and MIT. "We are going to design a school bus" says one, "Price is no object" (back then local governments had money), "...but it absolutely, positively must be safe!"

They are uncomfortable, especially if you have legs longer than the average six year old, but the vehicle itself is safe. The drivers can be a bit iffy. Truth be told, no American elementary school principle in his right mind would hire one in ten (here they get paid by the trip, not the hour), but the brakes are good, the horn is loud, the suspension stiff, and the body solid ...very very solid. 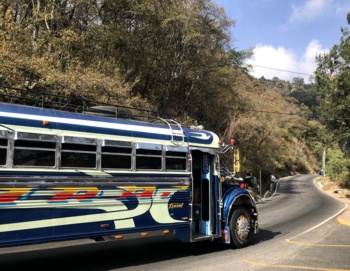 Years ago, when I first came to Guatemala, I was going to Lake Atitlan from Guatemala City. My driver and a competitor company's "piloto", as they are rather grandly called, got it in their heads that while what they were driving may have looked and smelled like beat-up old American school buses, were in fact, finely tuned Formula 1 race cars.

Now I consider myself to be a fairly game traveler. At least I didn't want my fellow passengers to think that I lacked the right stuff, so I played it cool. However, when the Guatemalans started gasping, I felt a disconcerting sense of relief that they too found this way beyond the ilk, along a welling foreboding that this was every bit as precarious as I imagined. 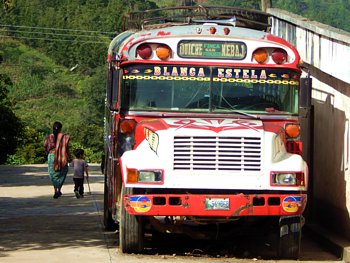 On steep mountain roads they passed each other on blind, hairpin corners. I vividly remember honking horns, smoking brakes and violently rocking back and forth.

I don't remember who won that ludicrous race, but in the end, we arrived none the worse for wear, not to mention well ahead of schedule. Don't get me wrong, I don't want to scare you off — that was by far the craziest bus trip I have ever taken, but even the tamest of bus rides are flavored with at least a smidgen of bonkers zest.

So, you wonder, how does one go about taking a chicken bus? Well, I can give you a few suggestions but the Guatemalan artistry that make buses so exotic to look at, make bus line schedules all but impossible to figure out. Don't bother. My best suggestion is to ask around and hope for the best. The Spanish word for 'bus' is 'bus'. It's easy to remember. Keep an eye out for people on the side of the road that look like they are waiting for a bus. They very well might be doing just that. 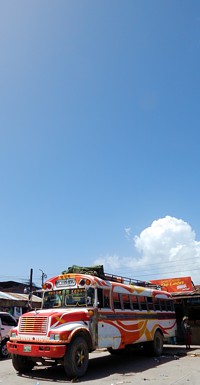 Try to avoid what we call the gringo tax. Watch what locals pay and hand the guy exact change. Act as if you are an old hand.

Bus companies cram more seats in the bus by drastically shortening leg room. It's is not at all unusual to have double the posted maximum number of passengers allowed. I have been on more than a few bus trips where there wasn't room for my arms, much less my legs.

Traveling in and out of Guatemala City on a chicken bus is a bad idea. Taking buses around Guatemala City is asking for trouble. It's too easy to end up on the wrong bus, going to the wrong place at the wrong time — seriously, don't. Once out of the city you can think about it. 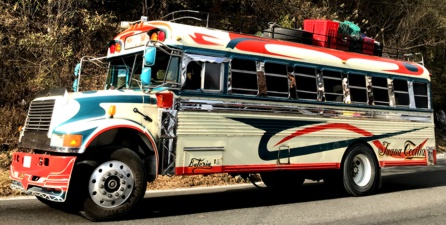 Give it a shot! If worst come to worst and you end up lost, take the same colored bus going back in the direction you came from. Odds are reasonably good you'll end up where you started. You will have gone nowhere, but you'll have had a great time getting there!

The chicken buses are cheap; but then they can be dangerous. They are certainly uncomfortable and, with any luck, slow. Yet I recommend them highly. For local color and character they can't be beat.

Think of all the stories you can tell when you get home!


This will give you some idea of what you are getting into.